“No one wants to pay for design anymore – they just use Canva instead!”

“No one wants to pay for design anymore – they just use Canva instead!”I was a few minutes into a catch-up call with a designer in my squad when this pearlpopped out of her mouth.I paused – genuinely surprised – then unleashed with:“What? That’s not true. What proof do you have?”“There are so many designers out there. Does the world really need one more?Is there even room for me?” She lamented.I took a deep breath as my blood pressure started to spike, because:A) I hate that she was second guessing herself and was feeling this way and,B) I am really fucking passionate about this.“There is value in design”, I told her.Yes, there are a lot of designers out there. But there are also a lot of mechanics anddoctors – do you think they second-guess their existence? NOPE! They know their isvalue in what they do.… So why don’t designers?I got to thinking, and I realised there are probably a few reasons why designersquestion the validity of their existence.WE ARE WOMENAs much as things are changing, we do still unfortunately live in a man’s world(check out the handmaid’s tale shit happening in Texas). And sometimes it’s easy tobelieve the beliefs instilled in us that we’re not worthy (yeah, even typing that mademe want to rage).But as much as it’s total bullshit, it’s still something that impacts us as women.Have you heard of something called, “the confidence gap”? If not, it’s basically atheory that shows that women are less self-assured than men. Which sucks,because when it comes to success, confidence matters as much as competence.Yet, compared to men, women:

The cause of this confidence gap can stem from a range of factors from upbringingto biology (Source: The Atlantic)It’s wrong. And if you think about how your daughter/sister/best-friend/mum mightlack confidence purely because she was born a woman?
Well, yeah, it makes you a bit angry.What you do as a designer deserves confidence. What you create and strategise foryour clients literally sets them up for their future – which is SO powerful & valuable.Choose confidence, despite the confidence gap.THE SEA OF VANILLAYep, so, there are a lot of designers out there. But if you’re struggling to be seen andheard, it’s 100% your fault.Don’t boot the messenger, lady. I’m telling you this because I love you and believe inyou. Because the truth is that it’s easy to blame it on all the other designers out thereshouting for attention, but the truth is if you’re not getting the attention you deserve,it’s because you are playing it way too safe.You’re portraying what you *think* a successful entrepreneur should look & soundlike, and by doing that you’re drowning in the sea of vanilla designers.Don’t feel bad, I did this too! I had black & gold branding because I thought that’swhat “lux expensive” designers did! I even had photos taken of me in a businessjacket … Oh man, it makes me cringe. All because I thought that’s what I had to doto be taken seriously & succeed.WRONG. Let your freak flag fly; it’s what sets you apart.I love pink, and cake, and I’m unapologetically uncool, but you still like me, right?So get a niche, show your personality, talk directly to your ideal client and take thepower back in your business. You have mad design skills that deserve recognition.It’s time to stop being a wallflower.Psst – No clue how to niche your biz?
Sign up for my free Niche Me, Baby challenge here.THE NOISEThe internet is a noisy place. I often say to my husband, Leigh, that the world wouldbe so much happier if the internet only had cute animal videos and that was it.I get it, people are talking about Canva & Fiverr and designers who will do a logo for$60! Thats cool, but it’s just noise and it doesn’t have to be your truth or your path.Hey, here’s a fun fact: YOU ARE THE BOSS.You started your business to ditch working for the man, so start acting like it. Youchoose who you work with, how much you charge & what you work on! It’s true.For every “Canva is taking my job” story I can beat it with a tale of success from myBootcamp students.Recently in the Bootcamp FB group we were talking about how much everyone wascharging before the course compared to what they are charging now.Here’s some of the answers…. 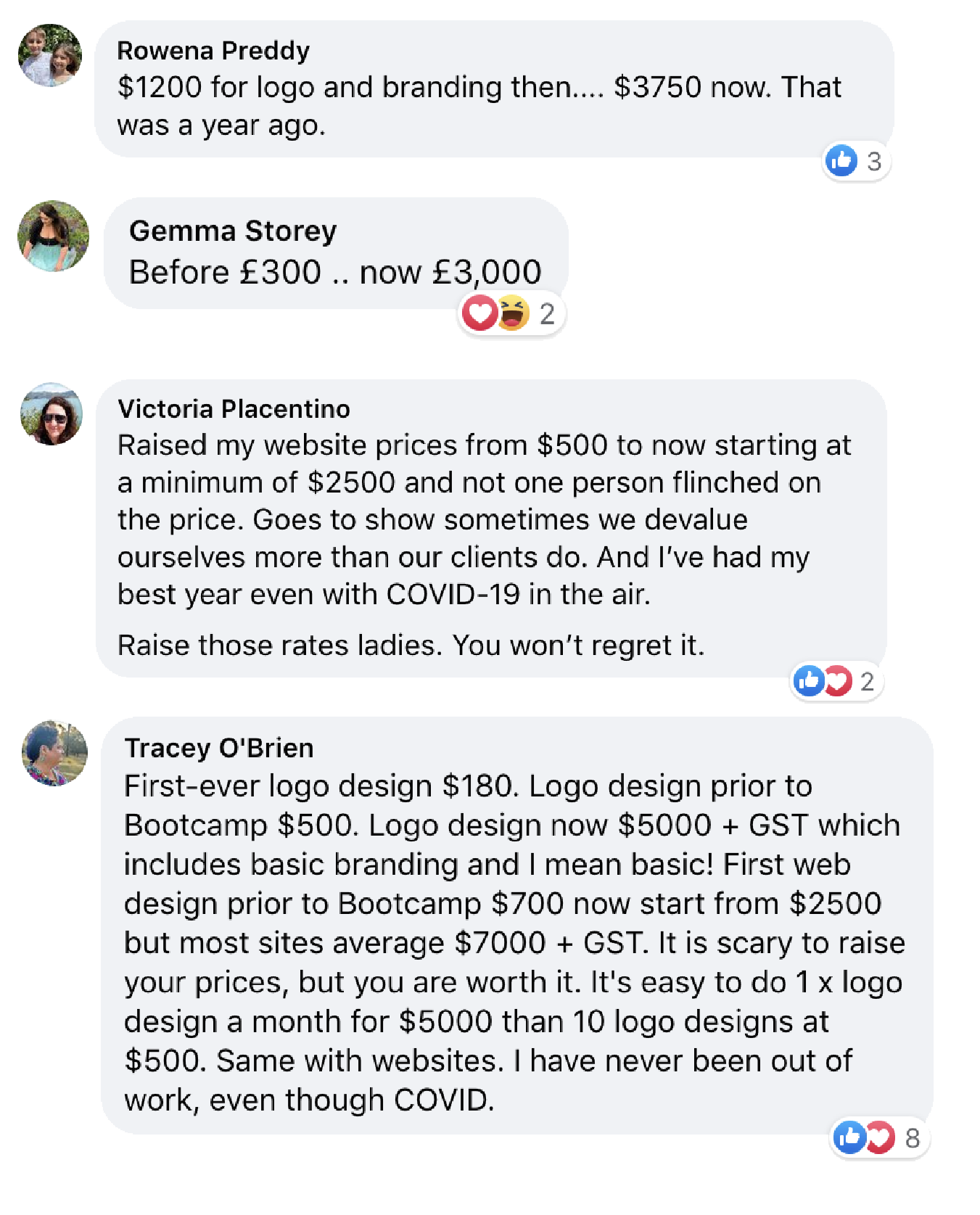 These women chose to be the boss! And, with my help, they chose to block out thenoise of the internet and focus on working on their own business. It’s a choice.So yes, as women graphic designers we have a lot going against us. I’m the first toadmit it’s not easy, but please know that it is not hopeless. You can create a thrivingbusiness despite Canva, Fiverr and all your designer competitors.Ready to choose your success?Bootcamp is coming soon! Stalk the deets here.All the love,Anna xx