Do you have faith in your business? Here’s why you should

I’ve had an idea for a blog post rolling around in my head for the last few weeks. And unlike most blog posts (which arrive on a cloud of inspiration and fairy dust), this one was causing some serious inner turmoil.You see, I wanted to talk to you about how important it is to have faith in yourself and your business. But when I say the word ‘faith’, I don’t mean in a religious sense. I mean a belief in the fact that it’s going to be okay. No matter where you are right now, it’s gonna work out. That kind of faith. The kind of faith that helps you weather the self-employed business storm. ‘Cos that kind of faith is pretty bloody important. faith noun1. complete trust or confidence in someone or something. So, like I do with all of my blogs, I started doing some research. I googled some Russell Brand quotes – because that dude is pretty deep, hey – but nothing resonated with what I wanted to express. Then I googled some Huffington post articles about self-belief and they all listed the same clichéd mindset shit that you read everywhere: “Feel the fear and do it anyway.” Which, I mean, is great advice … but I’m a little tired of hearing it, aren’t you? So this blog post idea about business faith continued to haunt me until I decided the best way to express my vision was to tell you a story.  A story about a grumpy entrepreneur that paired her signature scowl with a serious attitude problem. Which was dumb, ’cos this boss lady was GREAT at what she did … but instead of celebrating her awesomeness, she spewed negativity on every single part of her business. She hated client e-mails, no-one ever paid her enough, she knocked down every new business suggestion and sparkly idea before they had a chance to spread their wings and fly, because to her everything could – and would – fail. She loathed her competitors and was green with envy at how likable other entrepreneurs were. She didn’t believe that business could be easy. She didn’t believe she was the one who controlled who she worked with and how much she got paid (even though she totally was). She thought business was hard work and hard work was never fun. So she stomped through her days feeling miserable, with her mindset making it really, really hard for her to succeed. Her lack of faith, in herself and her business, was holding her down. Meanwhile, there’s another entrepreneur. A boss lady that knew if she never gave up, she’d have no choice but to succeed. A woman who dove in and tried every new business suggestion, and ran with all the sparkly new ideas, because it was okay if they all didn’t succeed – at least she’d have tried. This lady had faith that if she priced herself to represent her true worth, the right clients would come. And she was right – they did! Mind you, it didn’t happen overnight, but she never stopped believing it would. She took ACTION and thrived, because if something didn’t work out she believed there was an alternate path she would find that would lead to success/happiness/money. Her faith kept her going, it pushed her through the shitty times. Two true stories. Two entrepreneurs. Two lady bosses. Which one will you choose to be?‘Cos the truth is that it IS a choice. You can choose to be the lady with a scowl on her face and bitterness in her heart, making everything one million times harder for herself.

… or you can choose to be the lady that has faith that everything is gonna work out (and becomes a walking, talking, self-fulfilling prophecy). 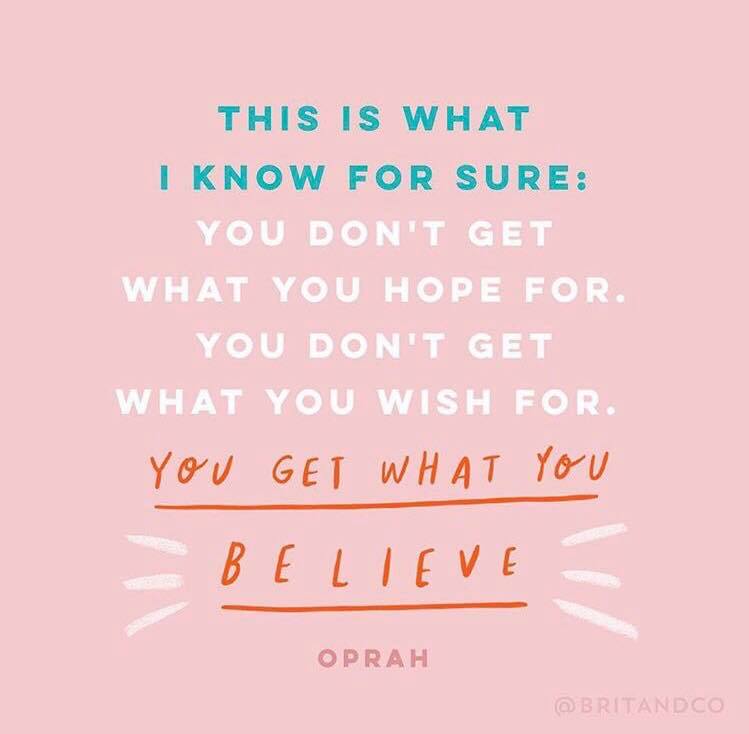 If you’re sitting there like, “D’uh, Anna. I gotta find me some faith.” Then laaaddddy, hold onto your tights, ‘cos I’ve got some belief-stirring actions comin’ your way! FOUR WAYS TO CHURN UP FAITH IN YOURSELF AND YOUR BUSINESSTake action on your ideasEven if you’re not sure if they’ll work, kick your doubt out the door and start working on your ideas before you have a chance to talk yourself out of them. Sure, you might fail. But in every failure is a lesson that’ll help you do it better next time. The best – and most successful – entrepreneurs are the ones that fail fast and take action on their ideas (again, and again, and again).  Focus on your energyThere is a book that I love called, “The Universe Has Your Back” by Gabby Bernstein and it talks about how the universe gives back the energy you put out. Think about it: Will your local café barrister give you that extra free cookie on top of your cappuccino if you’re scowling at her? Hells nope. So choose your energy wisely. After all, if you are a negative grumpy bum how do you expect to welcome any light in your life? (Oh sheesh – did I just turn full hippie?) Celebrate! Yes, a cliché about gratitude (I tried so hard to avoid the mindset clichés!) but please take a moment to think about all the good shit you’ve created out of thin air!  It was all you, baby. Keep that good shit up! Plus, doing your thang allows you to work from home. And set your own work hours. And take sick days whenever you want. And break through that glass ceiling ‘cos you’re in control of your destiny! See how much you have to be thankful for?Ditch the chip on your shoulder. Truth time: People aren’t out to get you. There is no-one sitting at home with a voodoo version of you, praying that you’ll fail. It’s not happening lady. Everyone’s at home looking at their Instagram and watching reality TV and planning their next vacay. You’re in the clear. And when they DO think about you, they’re cheering you on. Everyone wants you to succeed. And when it comes down to the wire, just imagine a mini George Michael on your shoulder, singing, “You gotta have faith.” 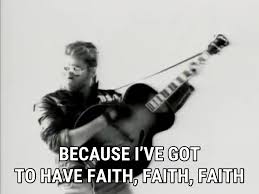 (At the very least, it’ll make you smile.)I believe in you, lady. Now it’s time for you to believe in you too. All the love, Anna xo